If you haven’t heard about the anti-piracy legislation attempting to be passed through our Congress check out Ben’s post HERE.  It’s essentially another power grab of an elite few who want to censor your rights and abilities on the internet.  Take a stand!

Major players today are participating in a “blackout” of services. 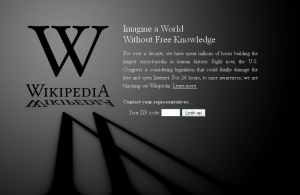 Check out Google and Wikipedia!  Don’t allow the few to overwhelm the many!  Write your Representatives in Congress and call your Senators.  Jump online, and get involved.

Vincent Consumanohttps://freshysites.com/team/vincent-consumano/
Vincent is one of the few who can say he was born and raised in the DC area. Vincent graduated Virginia Polytechnic Institute and State University (Virginia Tech) in 2008 with a BS in Marketing Management and The University of Mary Washington with his MBA in 2011. Vincent has an extensive background in the Defense Industry, where he spent time as a Deputy Program Manager for major Department of Defense subcontractors. In 2011 Vincent launched the Washington DC office of FreshySites and has been involved ever since. In 2013, Vincent left his DoD job and joined the FreshySites team full-time in order to help facilitate the company’s rapid growth cycle. Vincent is active in the community and serves on a few non profit boards. Personally, he loves the outdoors, camping, fishing, hiking, anything to get him off that computer!
See our featured website design work

FS Gives Back to A Good (And Delicious) Cause